Your Community, Your Bank

1st Bank Yuma was formed in 2001 by a group of local businessmen and businesswomen to fill what they perceived to be a gap in banking services in Yuma County. The bank expanded our market area in 2015 and purchased a First Fidelity Bank branch in Nogales, AZ.

Today we have five branch locations, $550 million in total assets and serve over 16,000 accounts. Since our formation, our staff, management, directors and shareholders are not only committed to the communities we serve, but "Making a Difference" in those communities. This "Making a Difference" vision emanates from our founding CEO Terry Frydenlund's corporate culture and the example set by our Board of Directors.

We are very proud of the fact that four prior "Philanthropists of the Year" (Donald Soldwedel, Stephen P. Shadle, Ronald Martin & Danny Bryant) either served or have served on the bank's board of directors. More recently, the Yuma Sun named our current chairman of the board, Danny Bryant, the 2018 Yuma County Citizen of the Year. 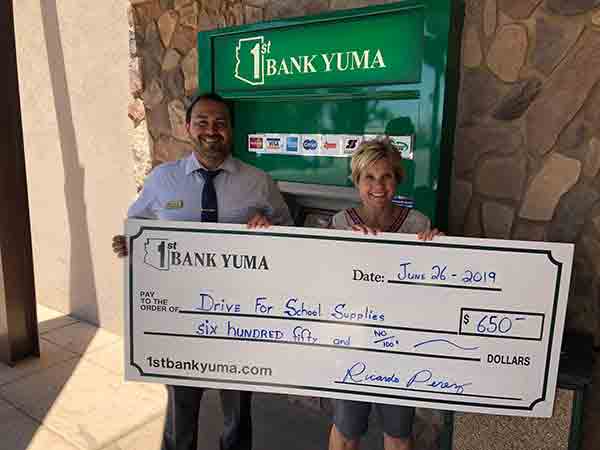 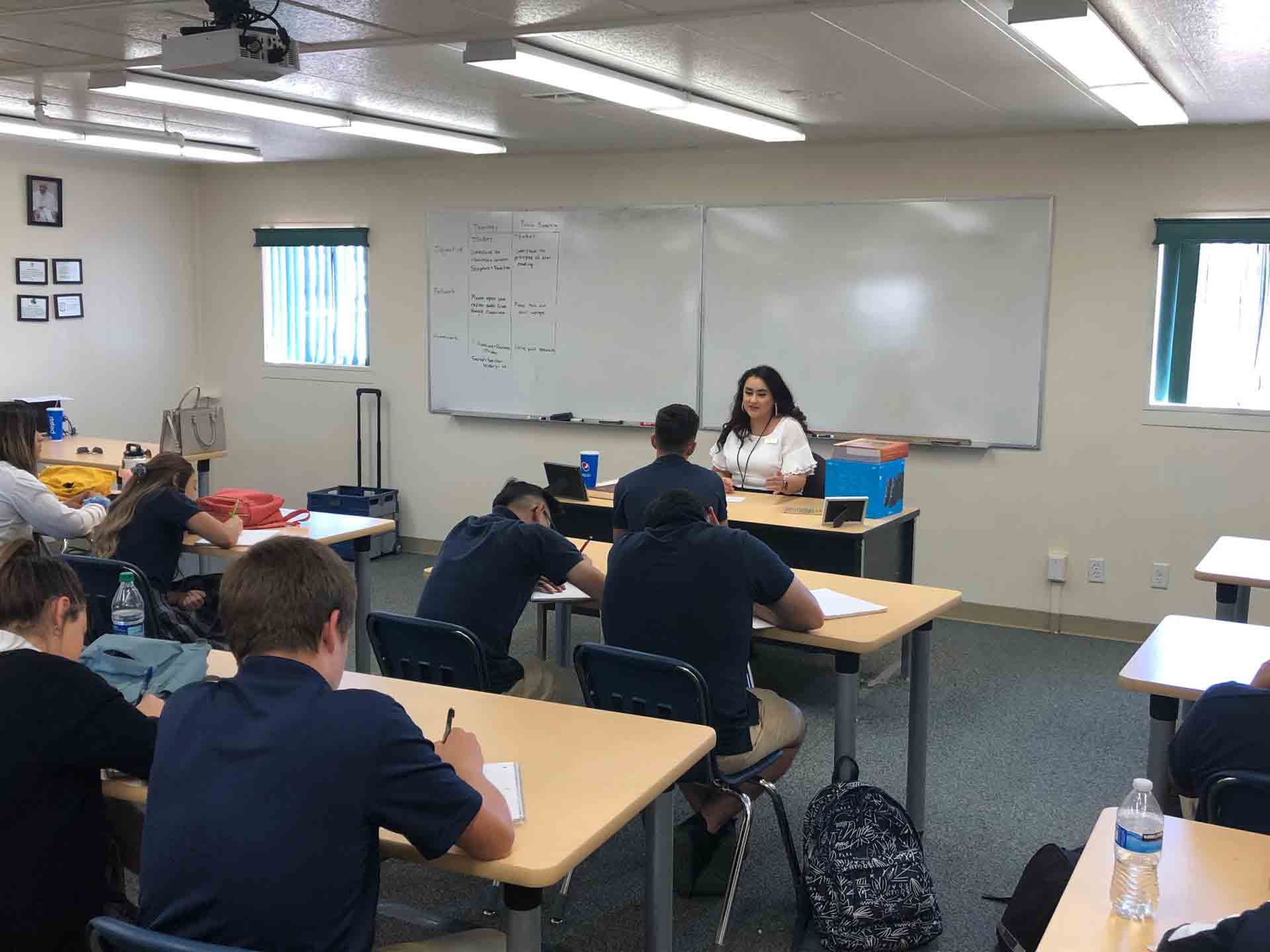 Our award winning "Kinder to College Financial Initiative" helps enlighten K-8, high school and collegiate students on the importance of financial literacy.
To date, over 20,000 students have been educated utilizing field trips for K-8, our "EVERFI" interactive web based tool in high schools and seminars at the collegiate level. 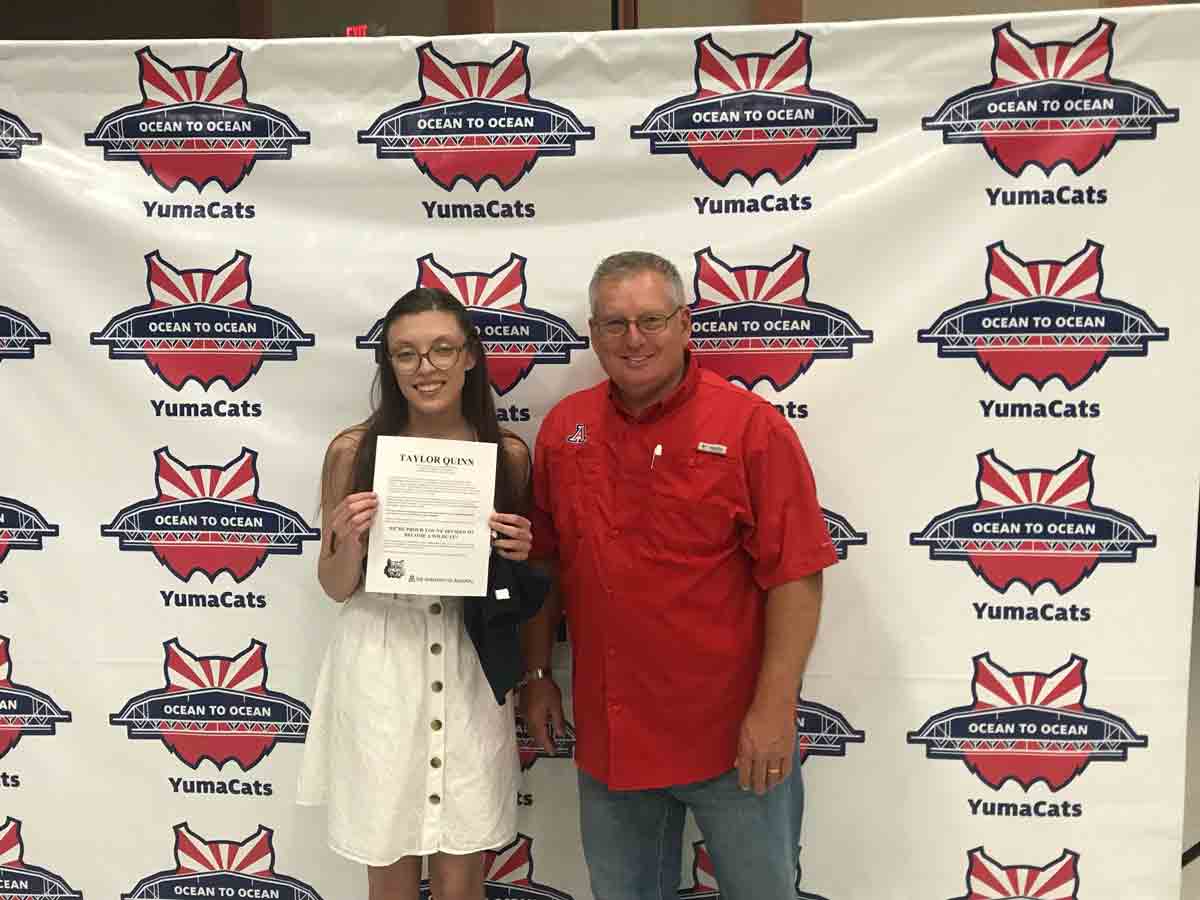 We support Miss Yuma County and Miss City of Yuma Scholarship Pageants. 1st Bank Yuma is also a Title Sponsor of Yuma U of A Alumni Scholarship Golf Tournament (this tournament has funded over $1 million in scholarships for local students to attend the University of Arizona). We are also a Title sponsor of the Santa Cruz Valley Unified School District #35 "Excellence in Education Banquet" honoring the top five percent of students in Nogales and Rio Rico. 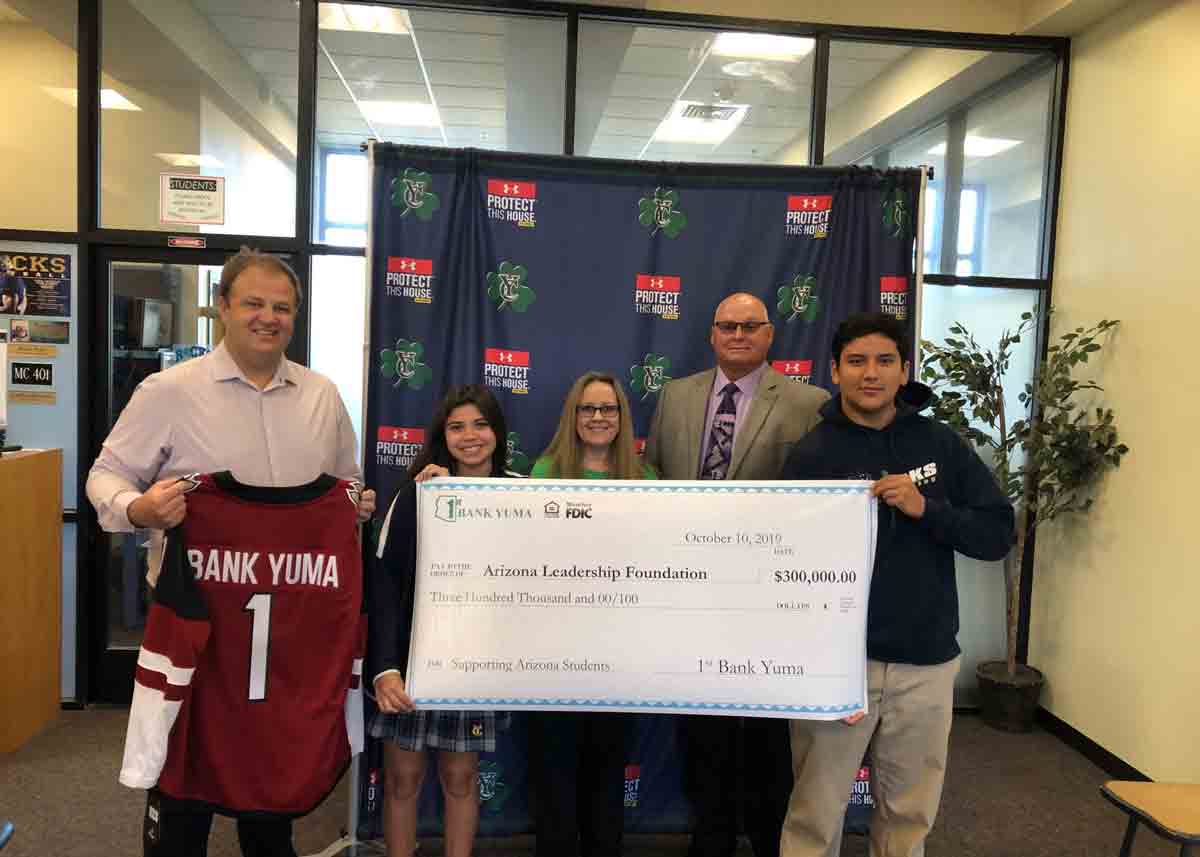 Amberly's Place $50,000 for a new kitchen in their domestic abuse facility.

The bank supports 4H and FFA buy purchasing a Grand Champion Steer, Pig or Goat every year at the Yuma County Fair since we opened in 2001. 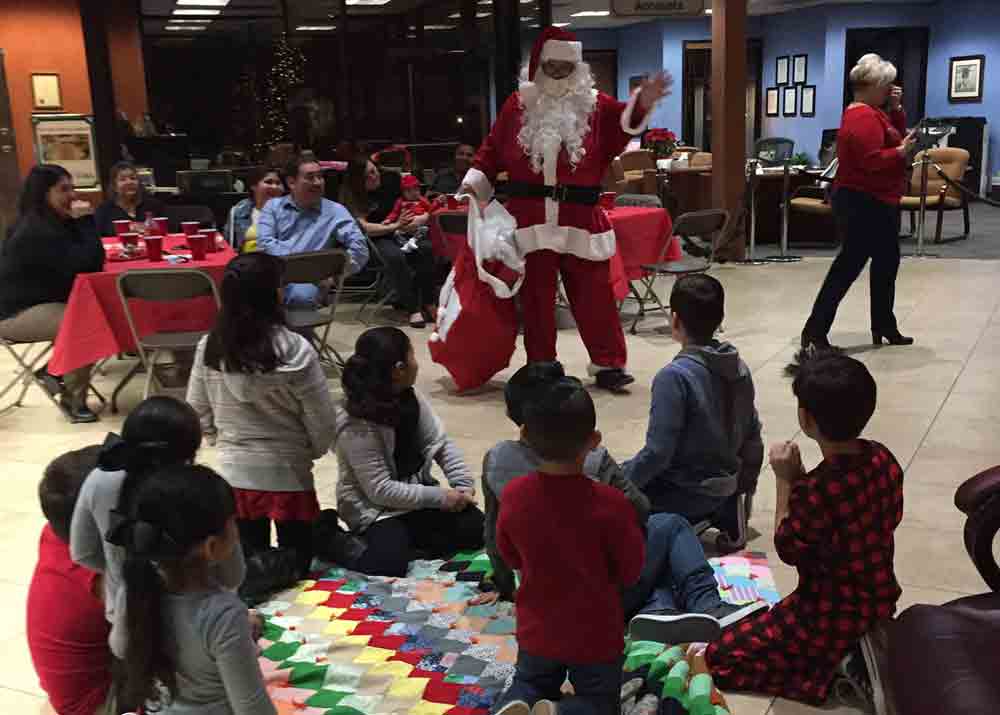 Thousands of volunteer hours are donated annually by management and staff to non-profit and service organizations (this includes service as Board Members, special projects and daily operations). 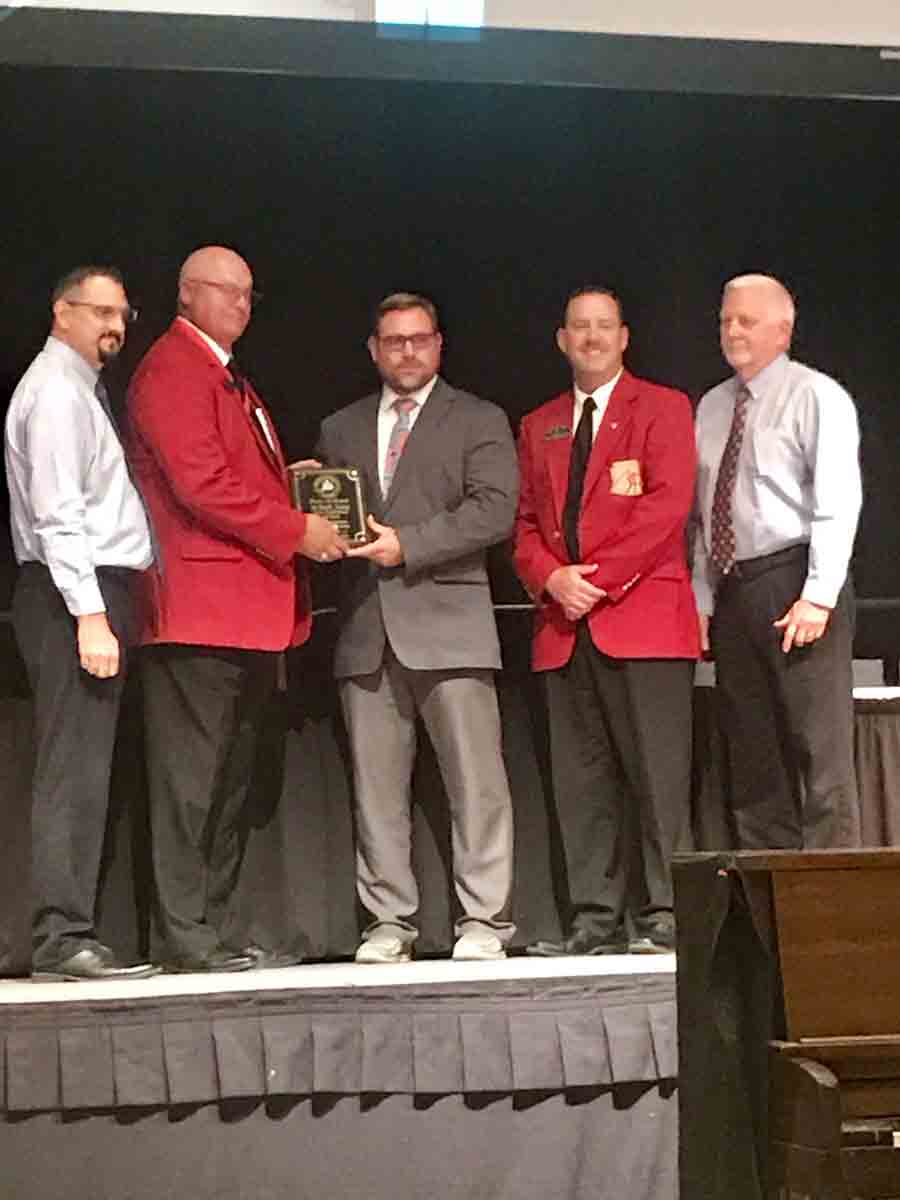 There are many other non-profit organizations and events that benefit from the bank's generosity. Our staff volunteers their time at the Food Bank, local Rotary Clubs, Hospice, Caballeros de Yuma, and many more. Additionally we sponsor events like the Balloon Festival, Midnight at the Oasis, Yuma County Chamber of Commerce Dinner, The Humane Society and many more.

It is important to understand that in order to give back to the community, like we have been able to do, the bank must be in sound financial condition. According to reporting from Bauer Financial, the Nation’s Premier Bank Rating Firm, 1st Bank Yuma has once again earned Bauer’s Highest 5-Star rating. This is the 71st consecutive quarter that 1st Bank Yuma has earned Bauer’s recommended rating of (5-Stars or 4-Stars).

We have a continuing history of strong financial performance and are poised to produce even better results moving forward - because of this performance we will continue "Making a Difference" in the communities we serve.

1st Bank Yuma is committed to ensuring the safety of your financial information. To protect you, please do not send confidential information such as Social Security Numbers, Account Numbers, Login Names or Passwords when communicating via our online form or email.